The history of state of Odisha (formerly Orissa) is very old. In different periods it bore names like Kalinga, Utkala, etc. The names signified different territorial extent ruled by different dynasties of rulers at different periods. Each of these comprised large parts of present Odisha but also included areas forming parts of the adjacent states.

The word `Utkala’ meant ‘Land of Artistic Excellence’ which implies that Odisha had been famous for its art and culture for long.

In the absence of recorded history over long periods, historians have placed reliance on archaeological discoveries to reconstruct the past. Rock engravings and rock paintings indicate that prehistoric men had lived in the state of Odisha. Excavations and surveys have brought to light prehistoric remains and many types of tools of the Stone Age culture, which prevailed in Western Odisha and also some other regions of the State. Metal Age sites have been found in Sankarjang in Central Odisha and Golbai in coastal Odisha. Iron tools have also been found. With more excavations at different sites, it will be possible to open up the hoary past of Odisha, more particularly the prehistoric period leading up to Mauryan rule.

The control of Nanda Empire over Odisha was short lived.

Samrat Ashoka, the grandson of Chandragupta Maurya invaded Kalinga to regain the kingdom. Lakhs of soldiers either died or were taken as captives. The bloodshed and loss of life and property as well as 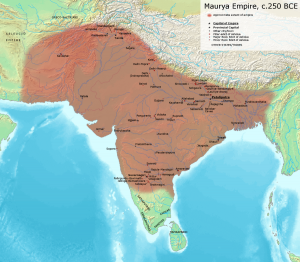 widespread destruction moved Ashoka so intensely that he embraced Buddhism and preached the religion of peace and non-violence far and wide.

Kharavela, a Jain King ruled the regions of Odisha in the 1st century B.C. His achievements were remarkable. He conquered many regions, and gave them good administration. He played a prominent part in Jain religious activities. He built the caves in Khandagiri and

Udayagiri hills near Bhubaneswar to provide shelter to Jain monks.

History of Odisha after Kharavela remains in darkness for many centuries. By the 4th century A.D., several portions of Odisha had come under the rule of Imperial Guptas. Thereafter several small or big dynasties ruled simultaneously or in succession over different parts of Odisha.

The Sailodbhava dynasty of Kangoda, was most important of them. From the accounts of noted Chinese pilgrim Hiuen Tsang, who visited Odisha in the 7th Century A.D., it is noted that Harsha Siladitya who first conquered Kangoda, extended his rule to the rest of Odisha. Harsha was a champion of the Mahayan school of Buddhism.

In the eighth century A.D., the most remarkable feature of Odishan history was its overseas maritime trade and commerce, and eventual establishment of colonies in South-East Asia. To promote overseas trade, several busy seaports came into existence along the seacoast of Odisha. Excavations and investigations are under way to glean further details.

During the 8th and 9th centuries, a powerful dynasty known as Bhaumakara dynasty ruled over the territories of Utkal, famous for the temple dedicated to Viraja, the presiding deity, which was the seat of Government of the Bhaumakaras. Odishan sculpture and architecture at that time was at a very developed stage. The rule of Bhaumakara dynasty was followed by the rule of Somvansi rulers. Shaivism became the predominant Hindu cult and enjoyed their patronage. Numerous Saiva temples, including the renowned Lingaraj temple in Bhubaneswar, renowned for its sculptural excellence, were built during their rule.

By the end of the 11th Century A.D. and early 12th Century, the Gangas captured political power over Odisha. The first ruler of this dynasty, Ananta Varman Chodaganga Deva (1078- 1147) started construction of the great Jagannath Temple at Puri. His successors completed the temple. The Ganga rulers warded off Muslim invasion of Odisha and extended their empire.

By the 13th Century, The renowned Sun Temple (Black Pagoda) at Konark was constructed by the Ganga ruler Narsingha Deva – I who reigned from 1238 to 1264 A.D.

After the collapse of the Ganga dynasty, the Suryavanshi Gajapati Dynasty succeeded to the Kalinga Empire. The first Gajapati King was Kapilendra Deva (1435-1466) who extended his empire by winning wars against the neighboring powers. His son Purusottam Deva consolidated the empire. But during the rule of his successor Pratap Rudra Deva, the Gajapati dynasty and its kingdom Kalinga suffered a political and military decline. During his rule Shri Chaitanya, the Vaishnavite Saint and preacher of Bhakti cult, came to Odisha. Under the patronage of Prataparudra, the Krishna Bhakti movement spread in the state. The weakened military force could not successfully confront external invasions. With the death of Prataparudra Deva, the Gajapati rule came to an end.

The Afghans conquered Odisha when the Mughal Emperor Akbar was ruling in Delhi. The Afghan-Mughal confrontation continued till Raja Mansingh, being directed by Akbar, suppressed the Afghans and ended their rule in Odisha and brought it under the Mughal Rule. Raja Mansingh appointed Ramachandra Deva Raja of Khurda, as king of Puri and entrusted him the management of the Temple of Lord Jagannath at Puri, including performance of some religious duties. The tradition continues up to the present day.

The Mughals ruled over Odisha for a century.

Nawabs of Bengal in Odisha

After the death of Aurangzeb, the Mughal Empire broke up and Odisha came under the rule of the Nawabs of Bengal. But this did not last long.

From 1741, Raghuji Bhonsle, the Maratha ruler of Nagpur, challenged with his Maratha army the hold of Alivardi Khan, the Nawab over Bengal, Bihar and Odisha. Odisha became the battleground between these two contending forces. Finally, after ten years of armed struggle, Alivardi ceded Odisha to the Maratha power. The Maratha rule in Odisha lasted for more than half a century.

The British East India Company seized Odisha in 1803 from the Marathas. With British occupation, the territorial integrity of Odisha was broken up, the Northern portions being merged with and ruled from Bengal and the Southern and Western areas being  likewise merged with and ruled respectively as parts of Madras presidency and Central provinces.

The British conquest of Odisha saw the emergence of Princely states, which were brought under their subjugation. During the rule of the East India Company over Odisha, a revolt called the Paik Rebellion by the rural militia broke out in Khurda in 1817. The leader of this uprising was Bakshi Jagabandhu, the Military Chief of the Raja of Khurda. This was a precursor of the Sepoy Mutiny of 1857. British East India Company forces ruthlessly crushed it. The British Government took over administration of Odisha along with the rest of India from the East India Company in 1858.

With the spread of education and publication of Oriya periodicals, national consciousness began to grow in Odisha.

Side by side with freedom movement, started a campaign for unifying all the outlying Oriya-speaking tracts into a separate province. In this movement for a United Odisha., there were many Oriya leaders and intellectuals in the vanguard. The foremost among them was Late Madhusudan Das. He was ably supported by eminent personalities like Gopabandhu Das, Chandrasekhar Behera and also by the prominent literary personalities such as Fakir Mohan Senapati, Gangadhar Meher, and many other contemporaries like the then Maharaja of Paralakhemundi, Late Krishna Chandra Gajapati Narayan Deo and Raja Saheb of Khallikote, etc.

Mr. Das set up an organization for this purpose, called ‘Utkal Sammilani’ in 1903 with the avowed aim of campaigning for formation of a separate province of Odisha on linguistic, basis by merging together the dismembered parts of Odisha then administered and forming parts of the then Bengal and Madras Presidencies and the Central Provinces. The movement fructified with the creation of a separate province of Odisha on 1st April 1936.  Odisha was one of the .foremost provinces in the freedom struggle of the country.

Soon after the independence of India on 15th August 1947, the 26 feudatory states of Odisha merged in 1948 directly with the Odisha Province and by the end of 1949 the complete state of Odisha as at present constituted, came into being.