LANGUAGE  AND LITERATURE  IN ODISHA

Odisha (formerly Orissa) is one of the 29 states of India, established on 1 April 1936and located in the eastern coast. It covers an area of around 1,55,707 square kilometers It is surrounded by the states of West Bengal to the north-east, Jharkhand  to the north,Andhra Pradesh and Telangana to the south and south-west Chhattisgarh  to the west and north-west.

Odisha has a rich culture and tradition and is also known as ‘the land of temples’ as the state is home to several exotic temples. The major attraction here is the classical Odissi dance form and is famous all over the world.The dance form is all about the love of Lord Krishna andRadha.  The culture has been influenced by religions like Jainism, Hinduism and Buddhism.

The Raghurajpur is a famous painting form and this  painting comprise scenes from Indian mythology and the prime characters are deities of Puri temple – Jagannath, Balabhadra and Subhadra.

Odiawas first discovered in Urajang in 1051 A.D. It  is the only Indo-European language of India other than Sanskrit and the 6th Indian language that has been conferred classical language status and forms the basis of Odissi dance and Odissi music.

Oriya has been recognised as the official language of Odisha and is most widely spoken language in state. The native inhabitants belonged to the Aryan family and the language here is similar to that of Bengali, Assamese and Maithili. Over the years Oriya has formed many other variations in the language like the Baleswari, Bhatri, Laria, Sambalpuri, Ganjami, Chattisgarhi, and Medinipuri.84% of the population in state speak Oriya. It is also one of the oldest languages in India.

There are other languages that are spoken here by people who come from different states. Hindi is the second most spoken language that is popular and is widely accepted. Besides, Urdu and Bengali along with Telugu is also spoken by some people. English is spoken only by those who are literate.

The beginning of Odia poetry coincide with the development of

Charyapada, the literature thus started by Mahayana Buddhist poets. Ashokan inscriptions at Dhauli hills near Bhubaneswar (3rd Century B.C.) provide specimens of Magadhi sub-dialect.The language of Charya was considered to be Prakrit.The first great poet of Odisha is the famous Sarala Das who wrote the Mahabharata. SaralaMahabharat has 152,000 verses compared to 100,000 in the Sanskrit versionof  Mahabharata. It is, however, an established fact that Oriya emerged as a separate and independent language around the tenth and eleventh A.D. with a standard Oriya script.

In  the 16th century, five poets known as Panchashakhasemerged. These are Balaram Das, Ananta Das,Jagannath Das, Achyutananada Das and Jasobanta Das. They believed in the same school of thought, UtkaliyaVaishnavism. The Panchasakhas are very much Vaishnavas by thought and preachings. The Bhakti literature in Oriya also flourished during time.

Literature  was developing under pattorn of local leaders and later with the arrival of British, the first Oriya printing typeset was cast in 1836 by the Christian missionariesThe first Oriya Magazine of BodhaDayini was publishedin 1861 from Balasoreto promote Odia literature and to draw attention to the lapses in government policy. Later the  first Oriya paper, The UtkalDeepika published in 1866. 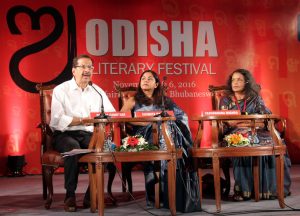 Chilika were the long poems or Kavyas.  Later, a literary thought emerged with the influence of Gandhiji, and idealistic trend of Nationalism formed as a new trend in Odia literature. Further literature  influenced by the romantic thoughts of Rabindranath Tagore.

The traditional Oriya theatre is the folk opera (Jatra), which flourishes in the rural areas of Odisha. In 1960s, experimental theatre made a mark through the works of M. Das, who pioneered the new theatre movement under brand of experimentalism but Modern theatre is not so famous in Odisha.

This started with  British occupation of  Orissa in 1803 A.D. The western impact was felt in every aspect of Oriya literature. The Oriya writers took interest in new genera like poetry, fiction, essays, drama, etc. Traditional Oriya poetry was replaced by elegy, ode, lyric, sonnet etc.

Fakir Mohan Senapatiis considered the Father of modern Oriya literature. Fakirmohan had a unique style of his own, using colloquial Oriya language replete with humour and satire. These Literary creations remain unsurpassed even today. The foundation of modern Oriya short story was also laid by Fakirmohan in late nineteenth century. His first short story was Rebati’ published in 1898.. He wrote scores of short stories covering the then Oriya village life, society, urban centers etc.

Other modern Oriya literaturer during the late 19th and early 20th century periods were Radhanath Ray, MadhusudanRao and GangadharMeher.

Currently “The OdishaSahityaAkademi”, the apex literary organization of the State of Odisha, was established in the year 1957 by the Govt. of Odisha, Education dept. with an autonomous status to work actively for the development of Oriya literature and to set high literary standards, to foster and coordinate literary registered in the year 1970 under the Society Registered Actof 1860.