Fair and festivals of odisha

A land of varied cultures and traditions, Odisha (Orissa) automatically serves to be a land of festivals. Religion or folklores, tradition or agriculture and seasonal variations or ethnic dance forms; all serve to be a setting for the celebration. Odisha (Orissa) celebrates one or other festival every month giving an opportunity to the visitors and natives both to enjoy and have real fun.

With some of the special rituals attached to each, these festivals add bright colors to the landscape of Odisha (Orissa)’s cultural heritage. Some of the festivals of this land of Lord Jagannath are dedicated to His holy self. Some other festivals celebrated in Odisha (Orissa) find a close resemblance to a lot of festivals of North India; however they are called by different names and are even celebrated in a different fashion. But amazingly, every festivity centers around the prayer sacraments to seek the blessings of gods, exchanging goodwill, distributing sweets, decorating houses, wearing new clothes, music, dance and feasting. Whatever is the way, each festival really makes the country come alive throughout the year. 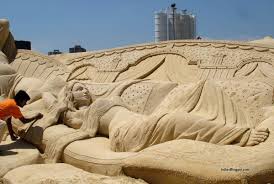 As its very name suggests, the Beach Festival of Puri is held on a beautiful beach namely Sea Beach, Swargadwara at Puri and comes as a celebration of the beauteous and splendid Oriya spirit.

Kalinga (major part of present Indian state of Odisha (Orissa)) once witnessed the bloodiest battles in the history of India by the Emperor Ashoka of Maurya Dynasty. He became a changed man from this place as he realized the hollowness of his victory. A buddhiest monk named Upagupta help him to enlighten peace over sword.   Kalinga Mahotsav or the National Festival of Martial Dance is celebrated to pay tribute to the Kalinga. It shows the vibrant traditions of martial art of India through dance and music. It is in the essence to mark the victory of peace over war. It took place on the outskirts of Bhubaneswar at Dhauli Shanti Stupa on the 10th and 11th of January this year. This Mahotsav attracts Martial artists from all over India.  At this Festival in Odisha (Orissa) you can see live performance of artists from different arts of India like Chhow and Paika from Odisha (Orissa), Kalaripayattu from Kerela, Thang Ta from Manipur. In this Mahotsav artists shows their skills with sticks, swords and various acrobatics concentrating their mind and body.  The main motive of Kalinga Mahotsav is to harmonize the vitality of martial tradition with sublimity of peace through the art of dance. So be a part of this festival.

Having celebrated a host of religious festivals, the pious land of Puri celebrates the Chandan Yatra, a festival that marks the conclusion of the cycle of religious festivals. Starting from Akshyaya Trutiya the festival lasts for twenty-one days. The name of the festival is very symbolic as sandal paste popularly known as chandan and water are its inseparable constituents. That is why the festival is held in the month of Baisakh, a time when the summer heat is at its peak and sandal paste and water are essential to keep the people cool.

Worship to the goddess of power is celebrated by the entire Hindu fraternity in general and Bengalis in particular in the form of Durga puja. The festival takes place in the month of Aswin or Kartik i.e. September and October according to the English calendar. An aggravated festive spirit engulfs every one as the ten armed image of the beautiful yet fierce goddess is erected in the puja pandal.  The clay idol of the goddess is decorated with immaculate decorative pieces, tiny lights and beautiful flowers. The goddess sitting on a lion is shown killing the ‘Buffalo Demon’- Mahishasura accompanied by her two sons, Lord Ganesha and Kartikeya, and two daughters Goddess Laxmi and Saraswati presents a really powerful picture standing true to its synonym ‘Goddess of Power.’ The arti ceremony that takes place early every morning and evening is a grand affair where the praises of the goddess are sung describing her gumption and valor. The sweet fragrance of incense adds to the charm.  And Odisha (Orissa) being a Hindu state also observes this festival with a great pomp and show. Though Durga Puja is celebrated in the month of October, celebrations start weeks ahead. The entire state strikes a different chord altogether echoing the music of bonhomie, brotherhood and festivity.

Konark Dance Festival  Konark Dance Festival 2016 – An ideal choice for not the monuments, beaches and scenic beauties only but Konark is also well known for its colorful festivals. Eminent classical dancers from all over the country get together from Dec. 1 to Dec. 5 to pay tribute to a master piece in stone- Sun temple at Konark. This classical extravaganza is a pure ecstasy.

The Konark dance festival Odisha is organized by eminent Odissi guru Gangadhar Pradhan’s Odisha (Orissa) Dance Academy in association with the Eastern Zonal Cultural Centre, Kolkata at Konark Natya Mandap in Konark. As the sun sets, the open air auditorium gains life in the form of musical beats and rhythmic movements under the star lit sky. With the poem in stone at the backdrop, the festival proves to be a true cultural feast. A celebration of Odissi, Bharathnatyam, Manipuri, Kathak and Chau Dances; the festival truly comes as a lavish feast for the eyes and ears. The sound of Ghungroo bells, flute and Pakhauj add on to the festive mood.

Puri Rath Yatra  Also known as Car Festival, this spectacular Chariot Festival is celebrated in the month of Asadha, on the second day of the lunar fortnight that falls during June-July. Popularly known as Rath Yatra, this festival is celebrated in the honor of Lord Jagannath who is believed to be an incarnation of Lord Vishnu.   The celebrated Ratha Yatra Festival is said to have started in the time of Svarochisha Manu of the second manvantara and is predicted to continue until the end of the second half of Lord Brahma’s lifetime. Even in the Valmiki Ramayana, it is mentioned that when Lord Rama was getting ready to leave this world, he told Vibhishan, Ravana’s younger brother, to worship Lord Jagannatha, the Lord of the Iksvaku dynasty in His absence.

Raja Parba is a three-day festival celebrated in the coastal districts in Ashadha month starting with the first day of the month. It usually falls mid-June. This is festival dedicated to Basu-mata, the Earth goddess. During this period, no agricultural activities occur to allow the goddess to rest. The first day is called pahila raja, the second day is proper raja and third day is called basi raja. Girls play on various types of swings. People exchange pithas among relatives and friends. Raja is also called Mithuna Sankranti. In places it is celebrated for four days and is known as Basumata Puja.

Bali Jatra  is celebrated to mark the voyages made by ancient sea traders from Odisha to Bali. It falls on the day of Kartik Purnima. On this day, miniatures of the boats called boitas are released in ponds, rivers and the sea.Festival is celebrated for a week. A major annual trade fair is also held in Cuttack.

Dhanu Jatra is a large-scale reenactment of the reign and death of the asura king Kansa which takes place annually in Bargarh. During the period of 1 to 11 January, the town of Bargarh is assumed to be the mythical city of Mathura. The neighboring settlements also take up names from the Mahabharata. The district collector and police superintendent also pretend to be employees of Kansa. The festival begins with the marriage of Vasudeva and Devaki. Ambapalli village is treated as Gopapur. During the festival, an actor pretending to be Kansa issues social messages which are contrary to mythical character.

The festivals of the tribals constitute a integral part of their social life and relate to their strong beliefs in the power of supernatural elements and community togetherness. Their traditions can best be captured at these fairs and festivals. Most festivals are occasions that mark the change of season relating to harvest of crops and some are religious events commemorating a local deity. Some of the larger and popular celebrations include a week long Tribal Fair at Bhubaneswar (starts 26 January), the Chhow Festival at Baripada (April), the Folk Dance Festival (January) at Sambalpur, the Tribal Festival at Koraput (November).  Innumerable folk traditions and spirits are manifested by way of observing vratas and oshas (fasts) by Hindus in Odisha.  The observance is believed to resist the materialistic aspects of human life, augment belief in religion, bring welfare, prosperity and long life to the near and dear ones, recovery from ailments, beget a good match, and may be a bumper harvest. Most of these observations are marked by a spirit of sanctity, worship and painting walls and floors with rice paste.