Natural hazards and other related aspects of Odisha
 Orissa is vulnerable to multiple disasters. Owing to its sub-tropical littoral location, the state is prone to tropical cyclones, storm surges and tsunamis.
 Its densely populated coastal plains are the alluvial deposits of its river systems.
 The rivers in Coastal areas with heavy load of silt have very little carrying capacity, resulting in frequent floods, only to be compounded by breached embankments.
 Though a large part of the state comes under Earthquake Risk Zone-II (Low Damage Risk Zone), the Brahmani Mahanadi graben and their deltaic areas come under Earthquake Risk Zone-III (Moderate Damage Risk Zone) covering 43 out of the 103 urban local bodies of the state.
 Besides these natural hazards, human-induced disasters such as accidents, stampede, fire, etc, vector borne disasters such as epidemics, animal diseases and pest attacks and industrial / chemical disasters add to human suffering.
 The State Odisha has a history of recurring natural disasters.
 While the coastal districts of Odisha are exposed to floods and cyclones, western Odisha is prone to acute droughts; a large section of the State is also prone to earthquakes.
 In addition, the State is also affected by disasters like heat waves, epidemics, forest fire, road accidents etc.
 The history of disasters substantiates the fact that about 80% of the State is prone to one or more forms of natural disasters.
 The two successive cyclones in October 1999, the severe cyclone which hit Ganjam coast and the Super Cyclone damaged the infrastructure in 14 districts of the State and disrupted public life very severely.
 With millions of trees uprooted during the super cyclone, the State, especially the coastal belt has become extremely vulnerable.
 With 80% of annual rainfall concentrated over 3 months, the State is highly vulnerable to floods.
 Odisha Disaster Mitigation Authority (OSDMA) promotes Community Based Disaster Preparedness activities so that people can face emergencies in an organized manner.
 OSDMA was formed to coordinate and implement the reconstruction work after the super cyclone, keeping in mind the need for disaster preparedness to face any future eventuality in Odisha.
 During Super Cyclone of 1999, 97 number of blocks and 28 ULBs and about 12569000 populations were affected. The total agricultural land affected was 1733000 hectares with 9885 number of human casualties.
Major Disaster Profile
Droughts
 The pattern of drought in the State is of a varied one, sometimes affecting the entire state, sometimes a few regions, and sometimes a few districts.
 However, the adjoining patch consisting of the Subdivisions of Padampur, Bolangir, Titlagarh, Patnagarh, Nuapada, Khariar, Bhwanipatna and Phulbani comprising of 47 blocks have been identified as drought prone zone.
 More stress is being given on minor irrigation, crop diversification, soil & water conservation and rainwater harvesting.
Cyclone
 Odisha is always vulnerable to cyclones in April-May and September-November.
 Once in every few decades a super cyclone strikes Odisha. Recent Super Cyclone that hit Odisha in the last Century were in 1942, 1971 and 1999.
 The Super Cyclone of 1999 killed about 10,000 and traumatized millions who survived its wrath. Over 15 million people were affected.
 Throughout India’s massive coastline, there area have a 250 cyclone-warning sets, of which 34 are in Odisha, covering 480 Km of coastline
1. 31 October, 1831 –Very Severe Cyclonic Storm —Crossed Orissa Coast near Balasore, Loss of life-50,000
2. 22 September, 1885 —–Super Cyclone—– Crossed Orissa Coast at False Point, Loss of life- 5000
3. 26-30 October, 1971 —-Very Severe Cyclonic Storm —-Crossed Orissa Coast near Paradeep, Loss of life- 10,000
Flood
 The 482 km long of coastline of Orissa exposes the State to flood, cyclones and storm surges and related impacts.
 Heavy rainfall during monsoon causes floods in the rivers. 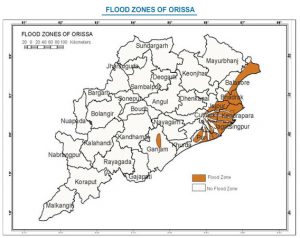  In Orissa, rivers such as the Mahanadi, Subarnarekha, Brahmani, Baitarani, Rushikulya, Vansadhara and their many tributaries and branches flowing through the State expose vast areas to floods.
 Damages are caused due to floods mainly in the Mahanadi, the Brahmani, and the Baitarani Rivers areas.
 These rivers have a common delta where flood waters intermingle, and when in spate simultaneously, wreak considerable havoc.
 This problem becomes even more acute when floods coincide with high tide. The entire coastal belt is prone to storm surges.
 The storms that produce tidal surges are usually accompanied by heavy rain fall making the coastal belt vulnerable to both floods and storm surges.
 People die; livestock perish; houses are washed away; paddy and other crops are lost and roads and bridges are damaged.
 The floods of 1980, 1982, 2001 and 2003 in the State were particularly severe; property worth crores of rupees was destroyed in the floods.
Earthquake
 The seismic zoning of Odisha falls between zones I to II i.e. low damage risk zone and moderate damage risk zones.
 The parts of districts coming under moderate risk zones are: Sundergarh, Jharsuguda, Bargarh, Sambalpur, Deogarh, Angul, Dhenkanal, Jajpur, Cuttack. Khurda, Puri, Jagatsinghpur, Kendrapara, Bhadrak, Mayurbhanj & Balasore.
 Low damage risk zones districts are Malkangiri, Koraput, Rayagada, Gajapati, Ganjam, Kandhamal, Nawarangpur, Kalahandi, Nuapada, Bolangir, Sonepur, Boudh, Nayagarh and Keonjhar.
 The entire districts of Jagatsinghpur comes under the moderate damage risk zone.
 In recent years, the earthquake in Deogarh-Bonaigarh area in 1995 caused substantial damage. Prior to this, earthquake tremors were felt in Talcher and Rengali Dam area of Odisha.
 Current seismicity is related to activity along Gondwana Basin boundary faults and those associated with continent – oceanic crust transition zone in the Bay of Bengal.
 The first recorded earthquake of the State was occurred in 1676 AD in Balasore area and the first earthquake in which 11 fatalities informed was Berhampur Earthquake of 1897.
Heat Waves
 In the year 1998 the State of Orissa faced an unprecedented heat wave situation, as a result of which 2042 persons lost their lives.
Chemical Accidents
 After the Bhopal gas tragedy, two of the 20 recorded major chemical accidents in the country have occurred in Odisha state.
 One in 1987 due to ammonia and methane gas leak and other one in 1989 due to chlorine leak.
 The major potential hazard areas by Chemicals in Odisha are: Paradeep, Rourkela, Ganjam, Cuttack, Angul-Talcher, Balasore, Jharsuguda-Belpahar and Rayagada.
Tsunami
 The destructive tsunami of Dec 26th, 2004 on the Indian Coast, in terms of its impact, seems to have occurred for the first time in the known history.
 As per the assessment made, 266 villages of different districts are vulnerable to Tsunami.

Lightning
 A good number of people, nearly 300 persons succumb to death due to lightning in the State every year.
Road Accidents
 There has been an alarming increase in the number of road accidents in the state in recent years. Poor road conditions, weak enforcement of laws, disregard for safety values, mechanical failures and lack of road awareness are the main causes of road accidents.
Odisha Government Institutional Set Up for Disaster Control
Orissa State Disaster Mitigation Authority (OSDMA)
 Orissa State Disaster Mitigation Authority (OSDMA) was set up by the Government of Orissa as an autonomous organization dated the 28th December 1999 (in the intermediate aftermath of the Super-cyclone in 1999).
 It was registered under the Societies Registration Act, 1860 on 29.12.1999 as a non-profit making & charitable institution for the interest of the people of Orissa, with its headquarters at Bhubaneswar and jurisdiction over the whole State of Odisha.
 The Department of Revenue is the administrative department of OSDMA vide Revenue Department Resolution No.39373/R dated 26th August 2000.
 Subsequently, the name of the Authority was changed from Orissa State Disaster Mitigation Authority to Orissa State Disaster Management Authority (OSDMA) vide Revenue & Disaster Management Department Resolution No. 42317/R&DM dated 27th September, 2008.
Aims & objectives of OSDMA
 The Authority has the mandate to not only take up mitigation activities but also relief, restoration, reconstruction and other measures related to Disaster Relif. These activities cover the entire gamot of disaster management including preparedness activities:-
1. Coordinate with the line departments involved in reconstruction,
2. Coordinate with bilateral and multi-lateral aid agencies,
3. Coordinate with UN Agencies, International, National and State-level NGOs,
4. Network with similar and relevant organizations for disaster management.
 The Chief Secretary to Government of Orissa is the Chairman of the Authority and has overall power of supervision, direction and control over the affairs of the Authority and the functioning of the office bearers.
 The Managing Director of the Society appointed by the Government of Orissa is its Member Secretary and Chief Executive Officer of the Society.
 He remains in overall charge of planning, implementation and monitoring of all activities of the Authority. He remains in overall charge of the funds of the Authority.

Odisha Disaster Rapid Action Force (ODRAF)
 Five Orissa Disaster Rapid Action Force (ODRAF) units have been set up at Cuttack, Chatrapur, Balasore, Jharsuguda and Koraput to assist the civil Administration at the time of calamities to clear relief lines, take up search & rescue operations and help in management of disasters.
 The ODRAF units have been carved out of the Orissa State Armed Police (OSAP) Battalions and the Armed Police Reserve (APR) of District Police