The state of Orissa is situated between the geographical coordinates of 81.27’E and 87.29’East longitude and 17.49’N and 22.34’North latitude. The state occupies a total area of 155,707 square kilometers. It is bound on the east by the 450 kilometer coastline of the Bay of Bengal. In the south, the state is bordered by Andhra Pradesh. The state of Madhya Pradesh lies to the west of Orissa while the West Bengal lies to the north. The state projects distinct yet homogeneous features of topography.

Geographical Location of Orissa comprises of many facets of Topology. There are the burning Chotnagpur plateaus on one hand while on the other lies the mystifying Bay of Bengal. The topography of the states reveals the exact location of Orissa on the axis of the earth and enlightens us about the unique physical features of the state. It lies between the 81.27’E and 87.29’East longitude and 17.49’N and 22.34’North latitude. It is the 9th largest state of India with an area of around 155,707 square kilometers. Bay of Bengal fences its boundaries from the eastern side with a coastline of around 450 kms. Madhya Pradesh lies on its western part while it has Andhra Pradesh on its South; towards the North it has West Bengal as its neighbor. The areas of the state bordering the Bay of Bengal has coastal plains, while the middle part has mountains and highlands and are sparsely populated areas. The Chotanagpur plateaus run in the central part of the state while on the west it has the rolling uplands. The state also has plain fertile lands as a result of the floods it experiences during the monsoons. These five units together comprise the metamorphological regions of Orissa. The coastal plain of Orissa is stretched between the Subernrekha River near West Bengal and River Rushikulya in south. Several rivers including Mahanadi and its tributaries like Baitarani, Suberrekha, Brahmani, Budhabalnga etc. forms their delta in this region before their final submergence in Bay of Bengal. The largest coastal lake of India, Chilka is basically a backwater lagoon formed by the main rivers and their tributaries. The lands of Orissa are irrigated by many large rivers and their tributaries. While some of them originate in Orissa itself, River Mahanadi is the largest river of Orissa and the sixth largest of India, originates from the Holy Amarkantak Hills of the Bastar Plateau lying in the state of Chatisgarh. But unlike river Bhauda and river Vamsadhara, Mahanadi forms almost all of its catchment area in Orissa while the former ones Originates from Orissa but irrigates the land of other states. Brahmani River is the second largest river of Orissa, River Koel and River Sankh merges into one at Ved Vyasa near the steel city of Rourkela to form River Baitarini. The three fourth part of Orissa is comprised of the middle mountains which were once part of the Gondwanas. Now these mountains are a part of the Eastern Ghat ranges. The highest peak of the region is called Deomali. The central plateaus comprise the slopes of the Eastern Ghats. The two main plateau of the region are Panposh-Keonjhar-Pallahara plateau and the Nabrangpur-Jeypore plateau. These two plateaus are more elevated in comparison to the uplands. Infact the elevation goes down as we move from the middle mountains towards the rolling uplands. The average height of Middle Mountains is 900 metres above sea level while it comes down between 305-620 metres in the central plateau and decline further with an average height of mere 153 metres

305 metres in the plains. There are a number of springs and hot springs also in the state and a number of waterfalls like Joranda and Barehipani, increasing the scenic beauty of the state. The flood plains are the most fertile lands of the state. The heavy rains of monsoons bring in flood in many regions of Orissa as most of the rivers of this state flows beyond their normal level during this season. The accumulation of the soils eroded by floods every year has resulted in the fertile lands in forms of Flood plains in Orissa. Most of the agricultural activities of the state takes place in these plains. 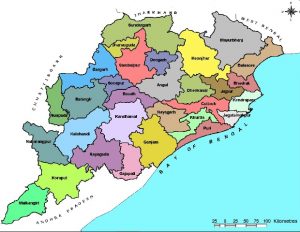 With a blend of several physiographical features in Orissa, the state is divided into five morphological units. These five units are listed below:

The state of Orissa is watered by several rivers and their tributaries. Some of the rivers which have their mouth in the Bay of Bengal flow through the state of Orissa. The rivers of the state are categorized according to their place of origination. River Mahanadi and Brahmani have their sources in another state of the country but form a big catchment area in Orissa before opening its mouth into the Bay of Bengal. The brackish lagoon called the Chilka along with the other waterworks is also part of the physiographic features of Orissa.

The Odisha Coastal Plains are the depositional landforms of recent origin and geologically belong to the Post-Tertiary Period. The 75 metre contourline delimits their western boundary and differentiates them from the Middle Mountainous Region. This region stretches from the West Bengal border, i.e. from the River Subarnarekha in the north to the River Rushikulya in the south. This region is the combination of several deltas of varied sizes and shapes formed by the major rivers of Odisha, such as the Subarnarekha, the Budhabalanga, the Baitarani, the Brahmani, the Mahanadi, and the Rushikulya. Therefore, the coastal plain of Odisha is called the “Hexadeltaic region” or the “Gift of Six Rivers”. It stretches along the coast of the Bay of Bengal having the maximum width in the Middle Coastal Plain (the Mahanadi Delta), narrow in the Northern Coastal Plain (Balasore Plain) and narrowest in the Southern Coastal Plain ( Ganjam Plain). The North Coastal Plain comprises the deltas of the Subarnarekha and the Budhabalanga rivers and bears evidences of marine transgressions. The Middle Coastal Plain comprises the compound deltas of the Baitarani, Brahmani and Mahanadi rivers and bears evidences of past ‘back bays’ and present lakes. The South Coastal Plain comprises the laccustrine plain of Chilika lake and the smaller delta of the Rushikulya River.

The Middle Mountainous and Highlands Region:-

The region covers about three-fourth of the entire State. Geologically it is a part of the Indian Peninsula which as a part of the ancient landmass of the Gondwanaland. The major rivers of Odishawith their tributaries have cut deep and narrow valleys. This region mostly comprises the hills and mountains of the Eastern Ghats which rise abruptly and steeply in the east and slope gently to a dissected plateau in the west running from north-east (Mayurbhanj) to north-west (Malkangirig). This region is well marked by a number of interfluves or watersheds. The Eastern Ghats is interrupted by a number of broad and narrow river valleys and flood plains. The average beight of this region is about 900 metres above the mean seal level. Morphologically this region can be divided in to the following units.

The subdued plateaus (305-601m) revel all the peculiarities of peninsular tablelands. They are almost flat and the monotony of geography is interrupted by the river valleys. These features are commonly met with in the upper Baitarani and the Sabari basins of the Keonjhar and Koraput Districts, respectively. In these uplands sheet erosion is most common while gullying is confined to the river valleys. These plateaus can be divided in to the Panposh–Keonjhar–Pallahara plateaus and the Nawrangpur- Jeypore plateaus.

The river valleys are net product of the action of rivers. They are fertile and times present and undulating topography. The major river valleys of Odisha are associated with the Brahamani, the Mahanadi and the Vansadhara rivers.

Rivers: There are four groups of rivers which flow through Odisha into the Bay of Bengal.