Odisha is one of the major maritime States, offering vast scope for development of inland, brackishwater and marine fisheries. The State’s 480 km long coastline with 24,000 sq. km area within the continental shelf has ample potential for marine fisheries development. Freshwater resources of the State are estimated to be 6.76 lakh ha comprising 1.25 lakh ha of tanks/ponds, 2 lakh ha of reservoirs, 1.80 lakh ha of lakes, swamps & jheels and 1.71 lakh hectares of rivers and canals. The State’s brackishwater resources are of the order of 4.18 lakh ha with a breakup of 0.79 lakh ha of Chilika Lake, 2.98 lakh ha of estuaries, 32,587 ha of brackishwater area and 8,100 ha of backwaters. By judiciously harnessing these resources, the fish production from capture and culture based capture fisheries could be substantially augmented to meet the domestic market demands, increase in export apart from createing employment and income generating opportunities for the rural poor and enhance their food, nutritional and livelihood security. 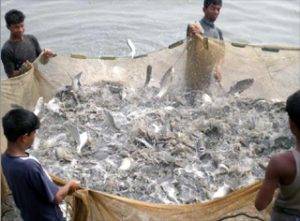 The fishery sector in Odisha is faced with low levels of literacy and relatively high levels of debt. This calls for a paradigm shift in the way fisheries is regulated and managed. The challenge, in this context, is to develop a long term policy and strategies allowing for the balanced and sustainable management and development of the fishery sector in Odisha. A new policy environment could spur overall development of the fisheries sector. In the marine fisheries sector the Odisha Marine Fishing Regulation Act and in the Inland fisheries, the Reservoir Fisheries Policy 2012 are the principal legislation/policy for managing fisheries. A clear and comprehensive Fisheries Policy supported by a legal and institutional mechanism, therefore, is an essential pre-requisite for preparation of a new legislation to effectively address sectoral concerns.

The average productivity of the reservoirs in the State was around 9.3 kg per ha as compared to the national average of 15 kg/ha. As a result of application of appropriate management measures such as continuous stocking of advanced fingerlings based on the provisions as contained in the State Reservoir Fisheries Policy notified in the year 2012 the productivity of the reservoirs has increased to 93 kg/ha. where intervention made.

There are 17,973 fishing crafts operating in the State’s coastline for marine fishing, of which 1,754 are mechanized, 6,734 are motorized and 9,485 boats are non-motorized. Trawlers account for 85 percent of the mechanized boats. There are one major fishery harbor (FH), three minor fishery harbours and 69 fish landing centres in Odisha. There is a proposal to construct 3 minor fishing harbours at Chandipur (Balramgadi of Balasore district), Chudamani (Bhadarak district) and Bahabalpur (Balasore district). The major fishery harbour at Paradeep and three minor fishery harbours one each at Gopalpur, Nuagarh (Astarang) and Dhamra Stage-I have been completed and commissioned. Out of 28 fish landing centres which were targeted to be provided with a jetty, 23 have been completed and the remaining 5 are under various stages of construction. National Fisheries Development Board (NFDB) has approved and provided fund for upgradation of 7 FH/ Fish Landing Centres.

The annual export of marine products from Odisha during the last five years ranged between 14,135 tonnes in 2008-09 and 30,980 tonnes (2013-14) valued approximately at ` 357.88 crore to ` 1800 crore. Contribution of Odisha to the present level of marine products exported from the country is about 2.5 percent in terms of quantity and 4.8 percent in terms of value. For developing inland fisheries, the Department of Fisheries has 106 fish farms, out of which 27 are fish breeding farms with hatcheries and the private sector has 89 fish breeding farms. Presently there are 108 fish seed hatcheries in Odisha with the designed capacity for producing around 70 crore fry.